Contestants, members and guests from Area 21 all assembled on a warm and bright October Saturday morning at Burnham Park Hall in Bucks for a fun-filled and lively Area Humorous Speech and Table Topics Contest – showcasing the best of the Area’s wit and spontaneous speaking skills!
Contest Chair and Area Governor Mark Emanuelson kicked off proceedings in a positive fashion by building up applause and getting us to make sure our whooping and cheering were all as good as they could be!
Chief Judge Krys Duvall also came up to explain judges’ protocols.

Mark then introduced guest speaker Tracey Miranda, who entertained us with her stand-up routine. She warned us that when us Toastmasters see a red light when driving, we still think we have 30 seconds before we need to stop… and then amused us with her Competent Mother Manual, a Toastmasters-style book that all new mothers surely need to read and aspire to if they wish to achieve their CM award!

Phil Sheahan was first up with ‘Life, Plan, Lemon’, talking about the seven deadly sins, his faulty Citroen, and a mid-life crisis… at 25!
Amanda Bouch gave us ‘Mirth Beats Girth’ – starting and ending her speech with her own wonderful infectious hysterical laughter. She told of how escapades with the gym, canoeing and jogging led her to realize that the perfect work-out in life was ultimately… laughter itself!
David Wise started his speech  ‘Tongue-Tied Teenager’ with some tongue-twisting audience participation, then went on to reveal how as a child he had trouble pronouncing his Rs, with his town of Ringwood coming out as Wingwood. But he kept practising with a tape recorder until he could say it… and somehow got a disco-dancing dinosaur impersonation into his speech at some point too!
Jan Trewartha‘s speech ‘Romancing the Cone’ spoke of she and her friend’s amorous adventures in Rome as ex-army nurses. She described it as the City of Love; the place that puts the ‘Rome’ into ‘Romance’. Not to mention the delicious ice-cream too!
Stewart Linford took to the stage in top hat and dickie bow for his speech ‘Winston Churchill AGM’, telling us the tale of the wonderful wooden chair he’d made (and delivered) to the said-AGM of his hero, complete with secret cigar drawer… but somehow, due to running late, ended up at the wrong party by mistake!
Sam Billington entertained us with his power point presentation ‘It’s an Education’. He acted rather convincingly as the proverbial headteacher to a roomful of Toastmaster pupils who clearly need to pull their socks up… or they’ll all end up on his detention list!
Therese Edkins was next with ‘To Win Friends and Irritate People’. She spoke of the time she travelled to the Isle of Man to attend the TTs, but during this eventful journey she somehow ended up knocking over a police motorbike after being stopped on her bike en route… and how she then talked her way out of this potentially awkward situation by using her well-developed Toastmastering skills.
Final speaker Chris Boden brought us ‘The Joy of Motivation’, and how following the literal advice (of that seeminghly-inspiring and harmless) quote of ‘sing and dance like nobody’s watching or listening’ got him into all sorts of unexpected trouble… 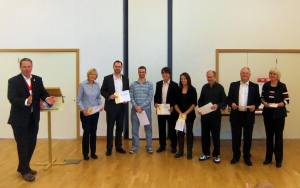 All the Humorous Speakers with their participation certificates from Mark.

Chris Boden went on to win Best Speaker, with Therese Edkins runner-up and Jan Trewartha finishing a very respectable third in a tightly-fought contest of a very high standard. 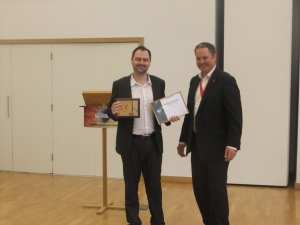 After the half-time break, it was onto Table Topics.
Mark asked each contestant: ‘If you had one superpower for a day, what would it be and how would you use it?‘
Philip Sheahan told us he’d go back in time to when he was 12 years-old and buy shares in Apple! By doing this, he mused that by now he’d be living a life of sunshine and luxury on his yacht in the Caribbean.
Marz Colucci‘s ingeniously described that his superpower would be to have his very-own customized Babel-Fish, which he’d place in his ear to understand what everybody he met was saying verbally and emotionally.
Peter Shreeve decided that his power would be to travel back in time to double-check whether our historical records of ancient cultures such as the Romans and Egyptians are as accurate as we believe… and also check back on his relatives from his family tree and spend a day with them.
Chris Boden planned to be the ‘God of Gaming’ for one day, whereby he’d clean up at the casinos and set himself up very nicely as a millionaire! He would have a superhero’s cape, but was concerned that his newly-found flying powers may cause problems with the Civil Aviation Authority.
Amanda Bouch declared her superpower would be the power of love! All she would have to do was walk into a roomful of people, and she could ‘infect’ them instantly with her power of love,.They would then pass it onto others, and soon everyone in the world would be smiley, relaxed, and at one, just for one beautiful day.
John Callaghan thought that having the power of public speaking would be useful for a contest(!) but other than that, he’d have the power of Super-speed – making him invincible and being able to get anything done. He’d also prefer to have the notoriety of being a super-villain rather than a superhero!
David Wise decided that to be a proper superhero, you do need a cape… but he’d hide his away and do something incredible with his life instead, such as having the power to heal people. But then he worried that he may get classed as a deity, with his power more of a curse than a blessing… if he ended up in the same predicament as Brian in the Life of Brian!
Jan Trewartha spoke of her recurring dream that she can fly… but can’t somehow get through the ceiling! But she’d love to have the full power of flight for one day, and to soar into the clouds. For a start, it would save her a fortune on airline tickets! She then reflected that she’d like to be a fly on the wall of the world, seeing what people really are like when their guard is down, and this would ultimately make her more tolerant of the human race in general. 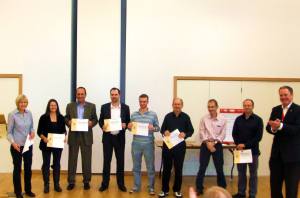 All the Table Topics’ Speakers with their participation certificates from Mark. 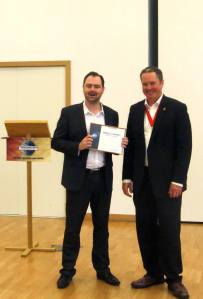 Mark also invited each speaker up at the end to give their thoughts on the contest and public speaking itself, and to share some personal insights with the audience, which we all really enjoyed.

Well done to all our speakers from MSC today – John, Sam and especially Chris, who now goes on to represent Area 21 at the District Contest in Dorking on October 19th in both contests – what an achievement! Well done to Mark Emanuelson too for organizing such an excellent and well-run event.
Hope to see as many of you there as possible to support him!
Our next regular club night in Maidenhead will be next Monday, October 14th.