Monday 24th March saw the 2014 International Speech & District 71 (as Toastmasters stalwart Joyce was happy to remind us) Evaluation Contest come to MSC. The theme of the evening seemed to be questions, with questions asked over the course of the night including: ‘Are you living your dream’, Whose life are you living’ & ‘Have any of you ever been propositioned by a ladyboy!’ What wasn’t at question, however, was the quality of the speakers.

After Sergeant at Arms Doreen Gowing opened the evening in her usual enthusiastic fashion, & President Jaqui Hogan clarified where the latter rounds would take place (hopefully not via a Malaysian aeroplane), Contest Chair Monica took over. She did a fantastic job, organising the contest in a confident yet efficient manner, & entertaining us with some great audience participation along the way. A particular highlight of this was Doreen’s ‘Just a Minute’ routine on body language, which ended with some fantastic body contortions centre-stage – much to the bemusement of the returning counters!

Karen Szulakowska  was the first contest speaker, giving a fantastic talk on the power of the pause, & the strength of stillness. Her speech techniques were also impressive, with plenty of questions & no less than nine instances of alliteration.

Steve Catchick gave a hugely entertaining speech on why Gap Years are too Good for Kids, telling us how having declined the opportunity as a teenager to join the army instead, he decided to take a much-later gap year in his fifties. He told us stories of how he nearly brought an interesting new wife home; fractured his ankle jumping off a cliff in New Zealand; and, to top it all off, joined Maidenhead Speakers!

Yohan McDonald asked us to ‘Imagine a Life Where Nothing was Impossible.’ His speech, entitled Beware of the Bull took seemingly small events in his own life (such as seeing a girl in the bar, or crossing a bull-field with his family), & made them relevant to all us by discussing what our fears really are. He also mentioned how this fed into his experience of joining Toastmasters.

Richard Davies was fourth, with a speech entitled ‘Slow and Steady’. His performance however was anything but slow, entertaining us with a speech filled with interesting & bizarre stories & characters – whether that was Humphrey being caught looking at pictures of transvestites, or Barry the Boss opening up a tropical fish shop!

Chris Boden was the penultimate speaker in the Contest (sporting a fantastic tie) which preceded a fantastic speech about throwing yourself in (sometimes literally!). He also proudly told us how he can now cook three vegetables!

Finally, Zahid Aziz closed this part of the contest with his speech ‘Follow Your Dreams’. Opening & closing with quotes from Eleanor Roosevelt & Walt Disney respectively, he told us how the difference between those who are successful & those who aren’t is simply having the courage to follow their dreams.

The winner of the contest was Chris, with Karen also going through to the Area Final as runner-up. 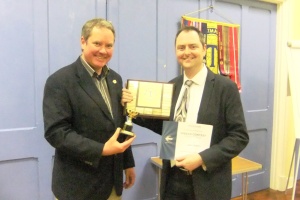 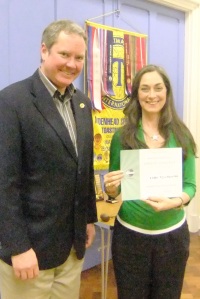 Karen receiving her certificate from Mark for finishing runner-up in the Club Speech Contest.

With the Speech Contest now over, attention turned to the Evaluation Contest. The guest speaker was Tsitsi Madxingira from Chiltern Speakers who gave a highly accomplished talk entitled ‘Rescue the Dream’. Continuing a trend set throughout the evening of inspirational speeches, Tsitsi asked us if we were living the life we wanted to live, comparing this general problem to her own experiences of choosing the University Course she wanted to do – rather than the one her parents wanted her to do.

Fatiha Lafka opened the Evaluations, commending Tsitsi on her structure, humour & confidence. She recommended that perhaps Tsitisi could make more use of the stage.

Karen Szulakowska noted Tsitsi’s ‘advanced’ technique of using non-rhetorical questions. She also encouraged more stage use, recommending ‘definite movements’, both with the body & face too. Karen also noted how good a speech this was considering it was only Speech #4 in the CC Manual.

Zahid Azir was next, & he commented on the speech title – ‘capturing our imagination’  before she’d even started speaking. He recommended that she could use even more vocal variety, & make hand gestures bigger & less localised.

Yohan Mcdonald commended Tsitsi’s ‘powerful & purposeful message’ & enjoyed her use of ‘colourful’ language, such as the phrase ‘dream assassin’. He recommended that she perhaps minimises her use of notes for her next speech.

Steve Catchick was impressed by Tsitsi’s structure, noting her use of the ‘power of three’ throughout. He thought this helped portray a simple message that we could all follow, although he thought her use of non-rhetorical questions was brave, but ‘risky’.

Finally, Jacqui Hogan brought her characteristic personality & humour to her evaluation, linking the three ‘fears’ Tsitsi had identified with participating in a Contest or Table Topics! She closed by saying that she does have a dream too… to hear more from Tsitsi!

Yohan won the Evaluation Contest, with Karen again taking second place. Both will participate in the Area Final on the 5th April. 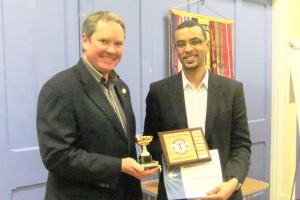 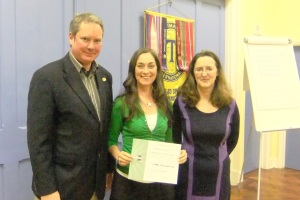 Karen (alongside Mark & Monica) back again to receive another runner-up certificate, this time for the Evaluation Contest.

Monica closed the contest by giving thanks to Chief Judge Sandra Davison & her team, as well as timers Mary & Peter, and counters Mell and Norman. The extended but fruitful evening closed with the prizes being presented by Area Governor Mark Emmanuelson.

Well done to all the speakers who participated, & we hope to see as many of you as possible to support them at the Area Contest at Burnham Park Hall on April 5th, at 9am.
Our next regular club night in Maidenhead will be even sooner – next Monday, March 31st.

One thought on “Club International Speech & Evaluation Contest in Full, with Pics!”